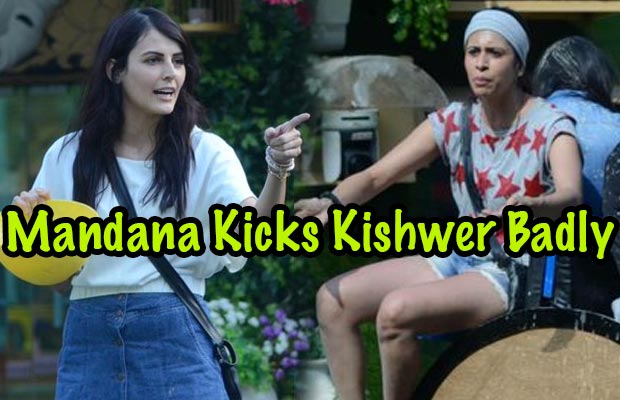 As earlier we informed that after nominations, Bigg Boss introduced mental as well as physical task named ‘Highway’ task. The work mode was on for Bigg Boss 9 housemates as the ‘Highway task’, pits two teams, A and B, against each other.
The plotting, planning and controversies had already begun as soon as the task started.Kishwer, Rimi, Puneet, Prince, and Suyyash are in one team and the rest contestants are in the other team. In this task, one team sits on the cycle rickshaw and one member of that particular team have to ride the rickshaw. This was simple as the team had to achieve 4 milestones i.e. covering cities Surat, Kochi, Jalandar.
The opposite team had to try their best by harassing and forcing then to get off from the cycle. After Prince‘ team, it was time for Rishabh, Mandana, Aman, Rochelle and Digangana to sit on the cycle rickshaw. Well, before the game started Bigg Boss had already warned the contestants that there should be no use of liquid substances. Despite of that Kishwer tried to pour cold water on Mandana and not thinking of anything, Mandana kicked on Kishwer‘s stomach.
Also Read: Aww! AbRam Is Not Liking Shah Rukh Khan And Kajol’s Onscreen Chemistry!
Kishwer who got annoyed with this asked Bigg Boss to take action against her,but there was no response from the Bigg Boss. She later removed the mic and seeing her, teammates Prince and Suyyash also removed the mic as Bigg Boss didn’t take any action against Mandana. The trio spent the entire day without mic but later they agreed to wear it.
Well, it doesn’t stop here there is more high voltage drama next!
Stay tuned to Business Of Cinema to catch more exclusive updates on Bigg Boss 9 Double Trouble!