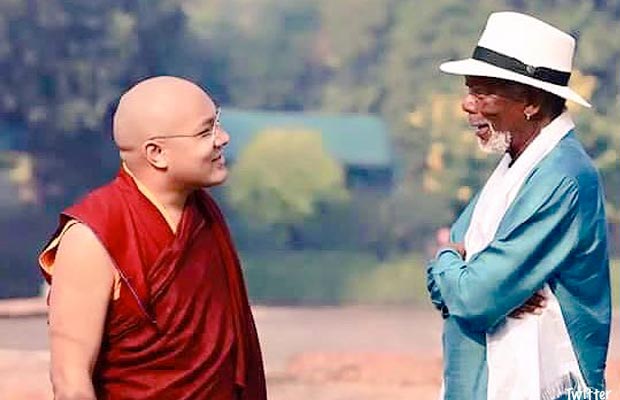 Morgan Freeman who is making a documentary about the biggest religions in the world stepped in India to cover Hinduism and Buddhism. He chose Banaras as the location for shooting about Hinduism, and was seen taking shots of Lalitha Temple, the lanes of Scindia Ghat and also the beautiful ritual of Ganga Arti. For the Buddhism leg he shot at Sarnath and was guided by Professor Binda of Banaras Hindu University at both times.

According to the tour operator for this documentary, Raj Kumar Singh,  Freeman absolutely loved the boat rides at the ghat of river Ganga. Freeman is especially known for his heavy husky voice and his evergreen movies like ‘The Shawshank Redemption’. ‘Seven’, ‘Bruce Almighty’, ‘Now You See Me’, ‘The Dark Knight’ series are some of the great films he has worked in.

Earlier, actor Leonardo DiCaprio had visited India to make a documentary about the growing global warming problem and how India as a part of the problem is working towards environmental sustainability. The star met with Sunita Narain in Delhi to discuss the same and was in India for a span of roughly four days. During his stay here, the star made a hush-hush visit to Agra to see the eternal symbol of love, Taj Mahal.

Well it looks like India is becoming an integral part in all world issues which is drawing more and more Hollywood names and faces like Morgan Freeman and Leo to the country. Definitely a step towards growth and become one globally.