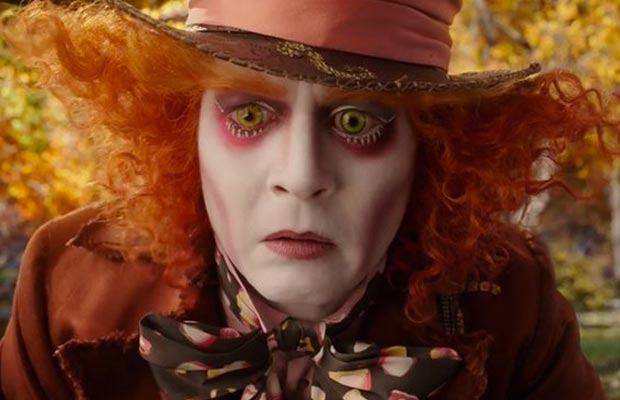 Hollywood fantasy drama ‘Alice Through The Looking Glass’ is out with its first trailer and we’re loving everything about it. The entire cast from the film’s first part, ‘Alice In Wonderland’ has reunited for an epic sequel which looks promising to the core. The film boasts a star studded cast of Johnny Depp, Anne Hathway, Helena Boham Carter and the lead role Alice played by Mia Wasikowska among others. Joining the cast this time as a new villain will be ‘The Dictator’ star Sacha Baron Cohen.

The roughly two minutes trailer gives us a glimpse of Wonderland’s current state after Alice leaves it to return to human world. Alice gets a calling from Cheshire Cat narrating the awful state of Wonderland and he urges her to return and fix things. Out of everything, Alice’s good friend Mad Hatter played by Johnny Depp is in grieve trouble and danger due to the film’s new antagonist Time. Which is literally what the name suggest, Time is the new enemy!

Also Read:Johnny Depp Reveals Why He Never Wants To Win An Oscar!

‘Alice Through The Looking Glass’ will thus have Alice fighting against time to save her friend Mad Hatter. As said in the trailer itself, “Next summer, saving the Hatter, is only a matter, of Time.” Impressive wordplay we must say! Absolutely loved the graphics that live up to the expectations one has while watching a Tim Burton movie. Audiences are already loving the first trailer, and are eager about catching more promos.

‘Alice Through The Looking Glass’ is being released by Walt Disney Pictures and will hit theaters on May 27, 2016. Trouble is double this time for Alice who not only has to save Hatter from the clutches of Time, but also has to face her old nemesis the Red Queen (Helena Boham Carter) who has escaped from her bonds. Watch the trailer here and tell us what you think, will you be waiting to catch ‘Alice Through The Looking Glass’?