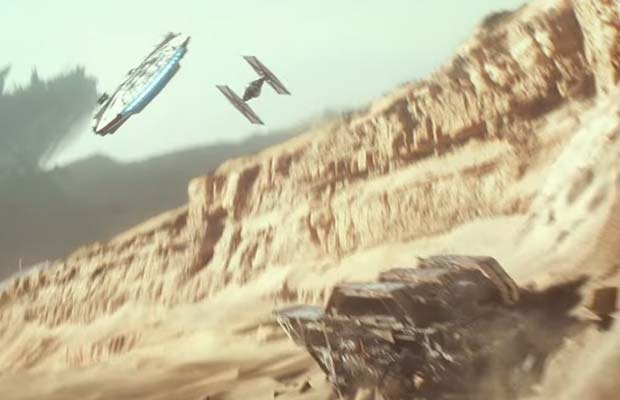 [tps_footer]Hollywood’s much anticipated film ‘Star Wars: The Force Awakens’ is out with its official trailer and the Internet is going gaga over it. The two and half minute trailer creates the perfect vibe everyone Star Wars fan was expecting to see which is why there’s a flood of positive comments received by it over the social media. Making a comeback after decades, the Star Wars franchise has a lot riding on its reputation. And with this official trailer, we’re sure the film will be a huge success breaking all kinds of records.

The official trailer of ‘Star Wars: The Force Awakens’ gives us an insight about the looks of the characters and a gist of the storyline of the film that has become one of the most awaited films as it marks the comeback of a franchise that is no less than legendary. ‘Star Wars: The Force Awakens’ is the 7th episode in the series of films released till date. The trailer gives us glimpses of the lead characters Luke Skywalker, Han Solo, Darth Vedar and Princess Leia among others.

‘Star Wars: The Force Awakens’ is all set to release on December 14, 2015. The film is also known as ‘Star Wars: Episode VII’ which is being made after the last episode ‘Star Wars: Episode VI – Return of the Jedi’ made in the year 1983. The grand visuals and intense storyline showed in the trailers along with the enthralling music proves that the film is promising to its core.

Starring actors John Boyega, Daisy Ridley, Adam Driver, Oscar Isaac, Andy Serkis, Domhnall Gleeson, Max von Sydow and Mark Hamill among others, the film is directed and coproduced by J.J. Abrams. Walt Disney Pictures is the production company behind the picture along with Lucasfilm Ltd and Bad Robot Productions. The force awakens this Christmas, are you ready for it?