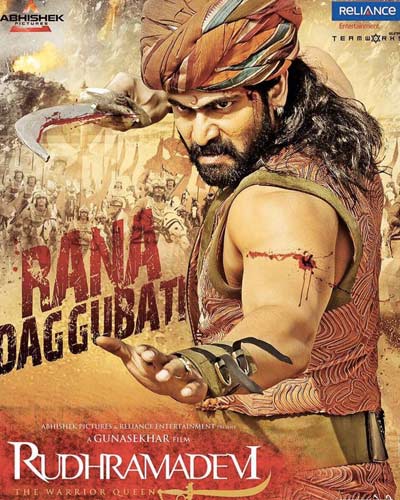 [tps_footer]The much awaited periodic drama ‘Rudhramadevi’ starring actress Anushka Shetty, Rana Daggubati and Allu Arjun in lead roles will soon hit theaters on October 9, 2015. And the recently released posters of the three stars create a striking image in the minds of the audience. Expectations have surely increased after seeing Anushka Shetty and Rana Daggubati’s mind blowing performances in S.S. Rajamouli’s megahit film ‘Baahubali’. Stakes are high for ‘Rudhramadevi’, that is following the steps laid down by ‘Baahubali’.

The official posters see Anushka Shetty Rana Daggubati and Allu Arjun in their fearsome avatars as they march into war. The historic drama also stars Malayalam actress Nitya Menen who plays a delicate feminine role. While the gorgeous beauty Anushka Shetty displays some staunch sword skills in the trailer while keeping the audience under her spell with her utmost beauty in other sequences. While Rana Daggubati and Allu Arjun continue to impress us with their hunk bodies and charismatic performance.

Also Read : Surprise! Chiranjeevi To Do Voiceover In Rudhramadevi

‘Rudhramadevi’ also stars actors Vikramjeet Virk, Krishnam Raju, Prakash Raj, Suman, Adithya Menon, Aditi Chengappa, Catherine Tresa, Hamsa Nandini, Ajay, Jaya Prakash Reddy, Ahuti Prasad, Venu Madhav and Prabha amongst others in pivotal roles. Rapper Baba Sehgal has also been roped in to play the character of Naga Devudu in the film. With an impressive star cast and direction of the Nippu filmmaker Gunasekhar, ‘Rudhramadevi’ also has pioneer Ilaiyaraaja giving its soundtrack and background scores. Cinematography of the film has been done by Ajayanan Vincent and the film is being produced under director Gunasekhar’s banner Gunaa Team Works.

Actor Chiranjeevi who will soon be doing his 150th film under Puri Jagannadh‘s direction, has been in close touch with ‘Rudhramadevi’ director Puri Jagannadhsince their film Chudalani Undi. Telugu superstar Chiranjeevi has been roped in by director Gunasekhar to voice the introduction and narrate the storyline in the beginning of the film. After a hit film like ‘Baahubali’, ‘Rudhramadevi’ is the next most awaited periodic drama film.