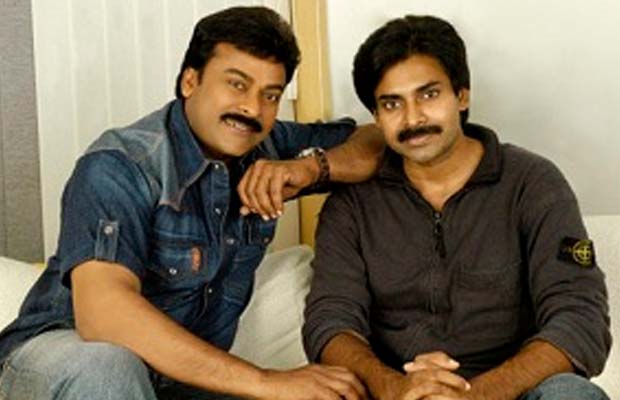 Tollywood superstars Pawan Kalyan and Chiranjeevi have recently got in touch with each other which was quite an emotional moment. Pawan who is busy with the ongoing shoot of his film ‘Sardaar Gabbar Singh’ took some time out to meet up his elder brother to congratulate him on the mark of his comeback film. Chiranjeevi who made a comeback after 8 years in son Ram Charan’s ‘Bruce Lee’ is once again the talk of the town, and brother Pawan Kalyan is quite happy about this.

Apparently, the brothers had some rift due to their political differences and were since then said to have been miffed at each other. But all that’s in the past now as both Chiru and Kalyan are all supportive for each other in the Telugu film industry. After seeing his brother’s cameo in Bruce Lee, Pawan Kalyan shared his thoughts at a recent event.

The actor opened up saying that he always adored Chiranjeevi as a star. Of all the people who wished to see him back on the screen, Kalyan was the happiest to see him don the greasepaint again. Being his younger brother, Pawan was also really happy when people said Chiru looked good in the film. Well that’s brotherly love right there!

Pawan Kalyan is also set to produce a film starring Chiranjeevi’s son Ram Charan as the lead. We wonder what it would be like if the brothers themselves decided to do a film together! The ‘Gopala Gopala’ star also visited brother Chiranjeevi’s residence recently where the duo spent some quality time together. Well after catching a glimpse of Chiru in ‘Bruce Lee’, we are waiting to see his 150th film take shape. He is apparently all set to star in remake of Tamil film ‘Kaththi’. Pawan Kalyan‘s ‘Sardaar Gabbar Singh’ is also at its final stages now.