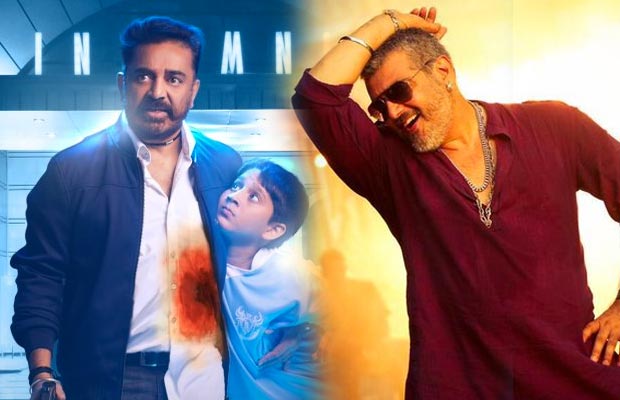 Two of the major Tamil films ‘Vedalam’ starring Ajith and ‘Thoongavanam’ starring Kamal Haasan have been released today. While audiences are going gaga just to see Ajith back on screen, movie lovers are absolutely loving Kamal Haasan’s thriller action drama. On one hand is ‘Thoongavanam’ that stars Trisha in lead role, and on the other hand is Shruti Haasan in ‘Vedalam’. All the factors considered together the question on everyone’s mind is that which film will emerge to be the winner today.

Talking about ‘Vedalam’, the film is about a man and his sister who migrate to another town and live a normal life. Ajith plays the role of Ganesh who is a simplistic person and is also a police informant. But as shown in the teaser and other promos of the film, he has a dark side to his persona which is crazy and devilish. The film sees actresses Shruti Haasan, Laxmi Menon and actors Aniket Chouhan, Kabir Singh among others. Romance between Shruti Haasan and Thala is something that could go either way and audiences might, or might not like it.

‘Thoongavanam’ on the other hand is a fresh movie with no unwanted masala and melodrama. The film’s trailers had already established the fact that it is going to be a hardcore suspense action thriller. Apparently the film sees Kamal Haasan as a corrupt narcotics officer who accidentally gets involved in a person’s murder. Actress Trisha Krishnan who is investigating the murder is suspicious about Haasan’s odd behavior and is following him around. The film also stars Kishore, Asha Sarath, Sampath Raj, Yugi Sethu, Madhu Shalini and Uma Riyaz Khan.

‘Thoongaavanam’ is based on the French film ‘Sleepless Night’ by Frederic Jardin, and the screenplay of the same has been done by Kamal Haasan himself. The film is being directed by Haasan’s former assistant Rajesh and is being produced under his home banner Raaj Kamal Films. The title ‘Vedalam’ has probably been adopted from the famous Indian tale ‘Vikramaditya Vethalam’. Vethalam translates to Ghost in English which hints towards Ajith’s rough image in the film. Directed by Siruthai Siva, it has been produced by AM Rathnam and S. Aishwarya.

While one marks superstar Ajith’s comeback, the other film is nearly perfect in every aspect. Ajith fans will surely opt to see him on the silver screen in ‘Vedalam‘, but movie lovers would be in for a treat with ‘Thoongavanam‘. What is your choice?